A 10 minute read in the series:  The Art of Making really really cool sh*t

I have a dear friend, Richard Wood, who is also a photographer...well more like New Zealand’s Photographer of the Year about 3 different times.  We got to know each other because at the national photography awards invariably we would independently submit an image that carried the exact same bizarre core idea.  It first started with Little Red Riding Hood fights back.

When you go watch  the photography awards, you sit in a room behind the judges.   At the beginning of the judging they show on a screen all of the images that will be judged in that category.  When I was a new photographer, I developed this triptych that involved little red riding hood, a gun, and a dying wolf. I had worked my ass off on that image, worked with both children and animals,  had a costume made.  I was proud.  I thought it was my best work to date.  I sat in the audience watching the screen as the images flashed up.

To my horror, up flashes Richard's beautifully crafted image of a defiant and tad sexy little red walking down the lane holding a samurai sword, with a wolf’s head in a basket.  “Seriously!.... WT complete Fark?” It was better than mine, as I was new and he was about to win his first photographer of the year.   The worst part... his was due to be judged about three prints before mine.  I hung my head and muttered a few more swear words.   Variations on this happened repeatedly for several years with my most common phrase uttered being..."For Fuck's Sake Richard!".  It became a sport actually to look and see which of our ten images would be random as hell and yet still have the same theme.  See the idea fairy...not exactly a monogamous creature.  The good news is that we became dear friends over what became the humorous nature of it and Richard helped mentor me to refine my craft to the point that it is today.

Another example came when I was in a Women in Film and Television lecture and the lady from the New Zealand Film commission was telling us that every time a coconut that as they are reading scripts they find very obscure and odd details that are incredibly similar in two completely unrelated manuscripts from people who don’t even know each other.   I think her example was a scene repeated in two different scripts where there was a turning point in the action that revolved around a seagull dying inside a room in the house.  She said that similar things happen every time they get a new stack of scripts to read... bizarre similarities.   In the science world this is called multiple discoveries where people create the same invention independent of each other and there are countless examples in history.

The RIpeness of the Idea

The point being...in time and history there becomes a moment when an idea is ripe.  If you pluck it too soon...no one will get it and you will be on the far vanguard on your own eating sour grapes.  If you time it right...people will be ready for it but you will probably not be alone in your presentation of it.    Nope darlin that vine doesn't just produce one juicy cluster.   This doesn’t mean that someone has stolen it from the other...nope it means that you probably have related muses/idea fairy...or the same one, or that you like Richard and I are probably kindred spirits and you would possibly make good friends because you are passionate about similar things.

Only a complete novice thinks their ideas are 100% original...They don’t have enough experience to know that they are standing on the shoulders of giants.  A novice or a completely annoying narcissist.  A master gets this.  She knows that she is just a deliverer of the message not the creator of it.  But it is by her uniqueness that the idea will be transformed under her care into something new and different.  Richard and I had the same ideas often  but our manifestations couldn’t have been more different. The important thing to note here is that your creative expression will be unique and important because it comes from you.  The better you get at your craft the more useful that expression will be to the world at large.

Elizabeth Gilbert the author of Eat Pray Love has a similar but different take on the concept.  She feels that ideas are energetic entities that come knocking on artists doors.  If someone takes up the idea they will stay and keep the idea energized but if they are slack about developing it the idea fairy will jump to another artist and see if the new artist has the attention span and skills to manifest the idea.  Her book Big Magic is a brilliant read and the story she told in there about her experience with this on a book she was writing gave me complete head to toe goose bumps.

Other times when I imagine where Ideas come from...I think of it as an idea ocean...

Imagine that above our heads there is an ocean of ideas.  The ideas swim around like fishes.  At certain times in history certain ideas breed and you have whole schools of those ideas swimming around and anyone can reach up and grab a version of that idea. All we have to do is cast our thoughts up into it and we can pull something down to us.  Now the section of idea ocean above our heads can either be teaming with fat delicious ideas or can be a fetid swamp of toxic waste.  It depends on what we have been pouring into the ocean with our thoughts, hard work developing mental discipline, and deeds.    The more we deepen our craft and refine our skill sets the deeper we can reach into that ocean where the fatter more delicious ideas are found.  The more time we spend on our cellphones and chasing dopamine hits of distractions the shallower our reach becomes.

So here is where I come to my point.

It isn’t the idea that is important.  It is how good you are at landing it and how much of yourself gets infused in the end product.  Some ideas are freaking marlins and take skill to bring in.  And some people are much better fisher persons than others.  But once you land the idea...you still have to cook it up to make it palatable to others...this is where your unique skill set and take on life comes to the forefront.  There are infinite ways to prepare and cook a trout...but your way will be your way that is what makes it special and ultimately how your idea will carry your unique signature and style.

The idea is only the first step of creativity, of bringing forth your best work.  There are 7 stages in total required to bring an idea from the land of just potential to a fully realized and manifested dish of yumminess.   This email series is my mapping out what I have noticed about those seven stages.  I think of it as a creative vortex.

When the vortex is in balance it is a smooth ride from idea to manifestation.

When you are out of balance though it can feel like a ride in a hurricane that had a baby with a washing machine.  Many ideas die in the thrashing that they take being brought down to earth.

So how do you stay balanced.  That is what I am going to be discussing in these emails.

If you are deficient in energy in this area you can’t dive very deep at all. It could be possible that your obsession with your phone and social media is slowly eroding your ability to think deep enough to make the connections necessary to create something interesting and new. This actually boils down to a hormonal response.  When you chase dopamine through social media, or any other addiction, it actually robs your seratonin which is the hormone you need to keep yourself happy.  Study after study are now showing that excessive cellphone use is linked to anxiety and depression.  Anxious and depressed people often lack the energy or courage required to see a project through to completion.  Brilliant book on this is called Deep Work by Cal Newport

Excessive energy in this area can be just as problematic.  This could be you if you think up all kinds of great ideas but you struggle to start the work necessary to create them.   You spend all of your time and energy going deeper down the rabbit hole, wanting to make sure that you understand every single tiny nuance before you can even think about creating something from it.  You want all of the certificates proving you have skills to make something before you have the courage to make it. But there is always another certificate to get...another rabbit hole to swan dive into so that you don’t have to face the potential of failure.

This becomes perfection paralysis and nothing gets actioned outside of your own head.  (pssst...failure is actually the most direct route to your best work...avoiding failure will keep you chasing your tail until you check into your grave.)

This pretty much can be boiled down into having the trait of thick skin.  Balanced ideas people understand that failure is a prerequisite for better work.   Sometimes your ideas are great and worth advancing...sometimes it is better to throw them back and allow them to grow some more.   The key trick here is a complete willingness to survive failure.  See the more you make the more you learn.  The more ideas you grab and thrash...the more discerning you become on which ones are better ones.   You only learn by taking the ideas and actually attempting to manifest them.   Fail, recover repeat.  Because the truth is they aren't failures...they are stepping stones on the path to your awesome.   So don't quit half way like a pansy stink face whiny baby.   Actually that is a failed analogy because babies are probably the most fail resistant creatures on the planet...just watch one learn how to walk.   See what I did there?  Baby steps darlin...baby steps.  So get up off of your smacked bum from your last failed attempt and start making cooler shit.

Tips to keep your idea waters clean and teeming with good ideas:

Next week I will be talking about the minds eye and mental filters.  Now that you have the idea how do you begin to shape it into something that can become a real thing.  This is the second of the the seven steps. 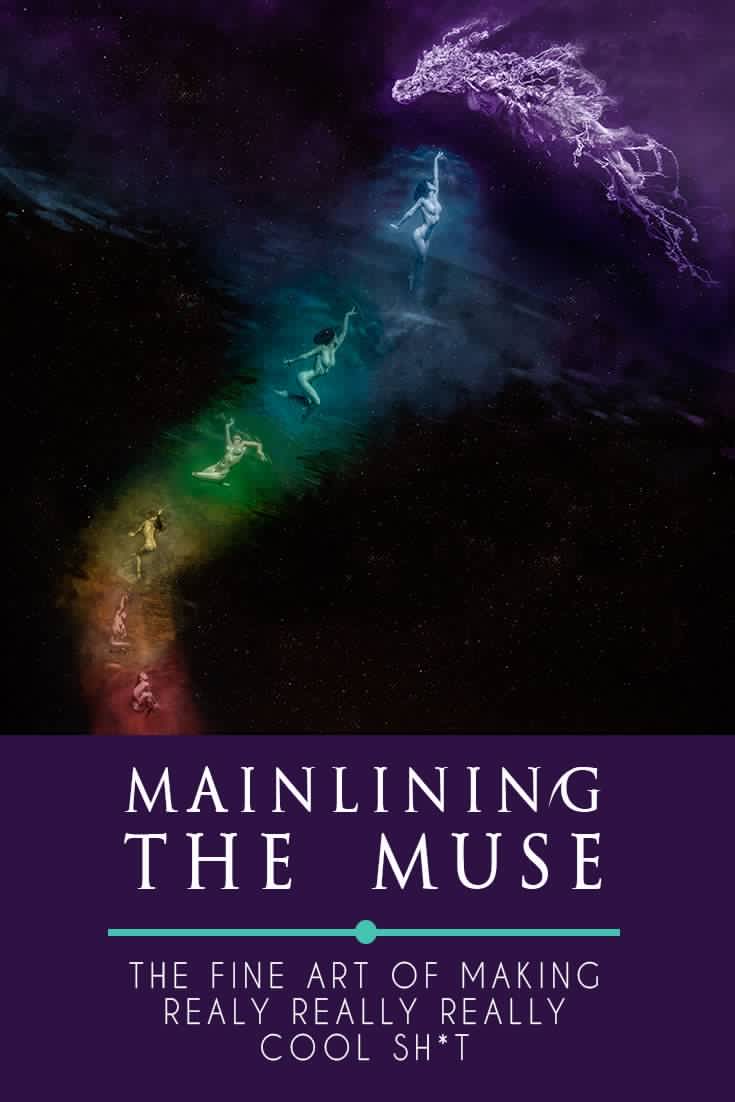 P.S.  If you live in Wellington and are interested in diving deeper into learning how to bring your best work out of you.   I am going to be teaching a two hour course at a very cool bar called Photon Flux on the 2nd of November.  100% of the ticket sales go to fund the Everybody is a Treasure Project.   Early bird tickets cost only $25.  Is your best work worth that tiny an investment...Yeah I think it is too...plus you get to pay it forward on to another great idea adding to your idea Karma. There are 100 tickets available. You can get one by clicking here.

Not in Wellington but want to get on the mailing list to learn more about these 7 steps I explore in this series from idea to manifestation?    Excellent drop your details here and I will hook you up.

0 comments on “Creative Mojo: Idea Fairies really are quite loose”Add yours →